Making our way to Bolivia, Salar de Uyuni (salt plains) via Chile. We finally board our plane to Santiago, Chile after a few unexpected delays in Sydney.

We arrived in Santiago the capital of Chile 3 days ago after a 16-hour flight. The first night we spent sleeping off our jet lag and adjusting to the local time zone. Adjusted, we then decided to venture out and discover Santiago, stumbling across a festival in the main square, as you often do in South America. We managed to sneak our way into the official photographer’s area, snapping some great photos of local Santiago life. 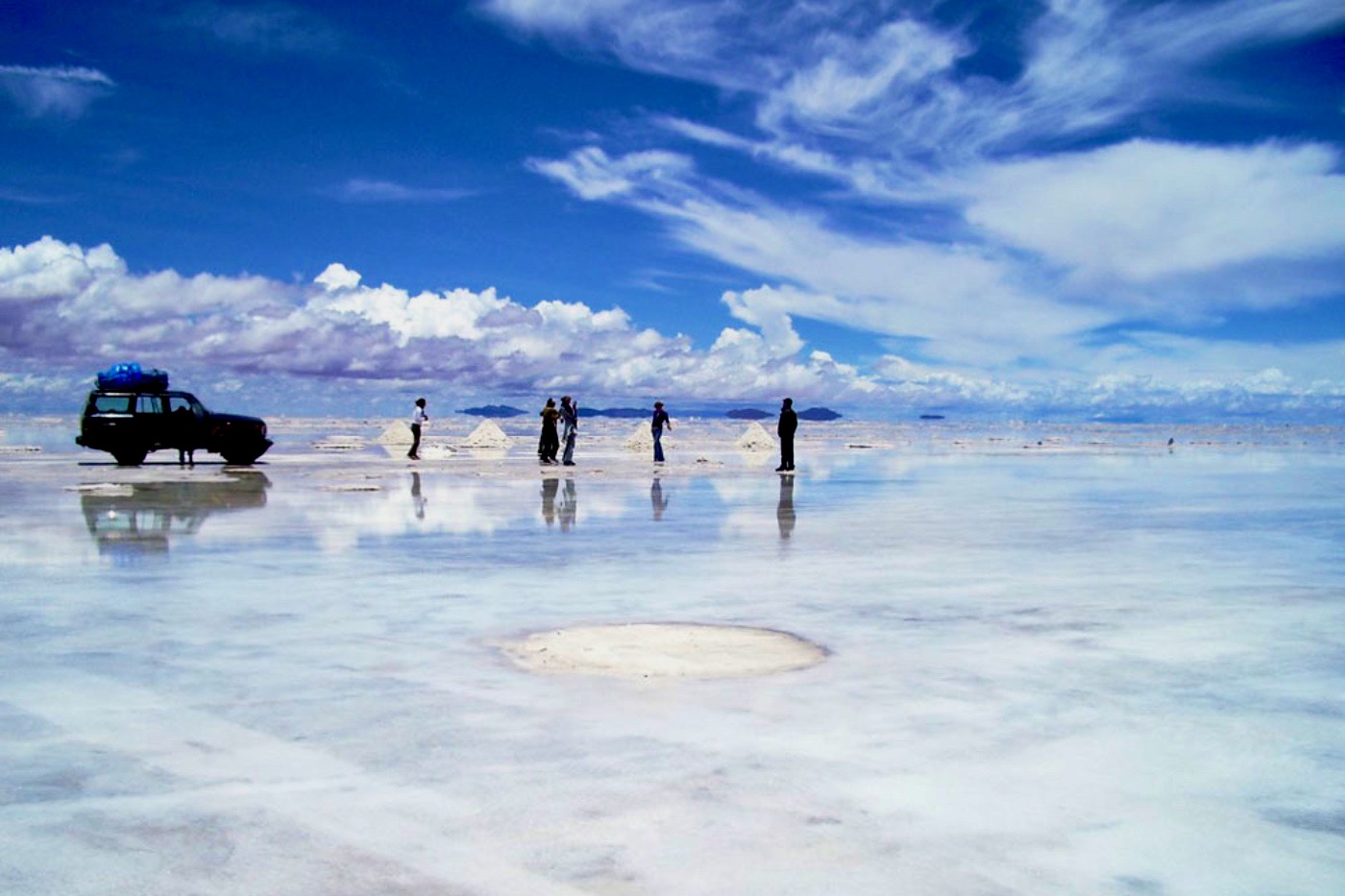 From here we flew up to the western town of San Pedro de Atacama, were we joined a group for the next 3 days to tour the Salar de Uyuni (Salt Flat’s in a dodgy 4-wheel drive, well it was cheap).

First, it was to meet our guide Juan. He had no front teeth and 1 ear missing with a brightly coloured plastic pink flamingo dangling from his mirror. We soon nick named him ‘Juan ear in the mirror’!

Relieved, we have joined up with a fun adventurous group. Our group 2 German girls, 1 Spanish and 1 Swiss guy. We can feel the next 3 days will be the most amazing experience.

We head off in our dodgy 4-wheel drive, 6 of us squished in (no communication or CB radio) with ‘Juan ear in the mirror’. Our plastic flamingo bobbing from the rear vision mirror, we wondered if we were going to make it across the baron salt flats alive. 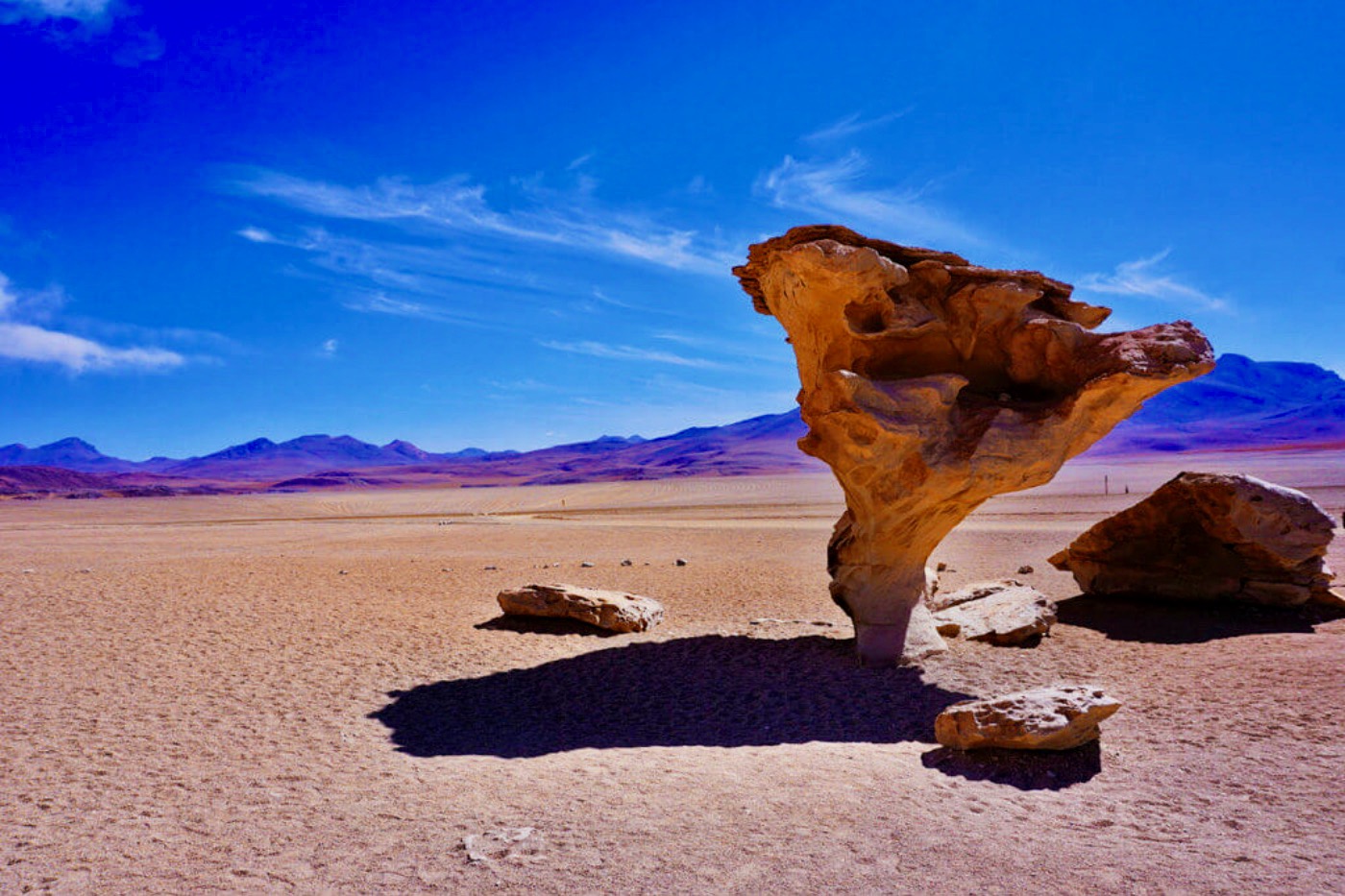 The landscape was amazing, it was like we were on the moon with big boulders and large jagged rocks everywhere quickly changing to salt flats that looked like big frozen ice lakes, the more we drove in.

There were times when we thought we were seeing a mirage with hundreds of bright coloured pink flamingoes, woolly llamas and other wildlife hanging out in the Sulphur springs, steaming up from the ground beneath. 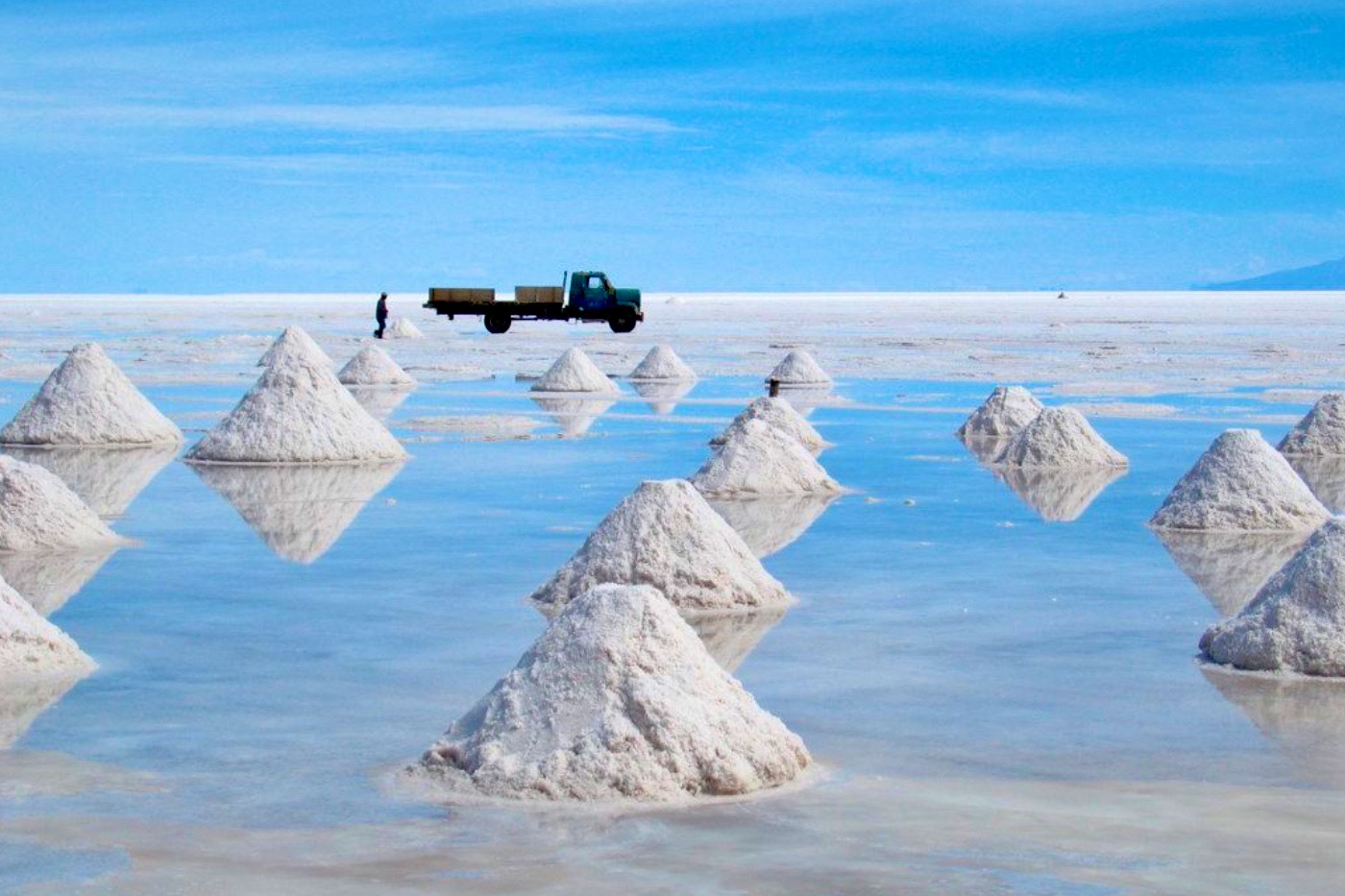 The salt flats go for kilometres with Bolivians ice picking the salt, creating little mountains of salt across the salt plains, carting the salt back in buckets to the local town.

In the local town it’s here the older Bolivian ladies fill plastic bags with the salt and use a pre-historic looking Bunsen burner to seal the bag. Big old trucks collect the bags of salt delivering it ready to be shipped all over the world.

Did you know Bolivia is one of the biggest salt providers in the world and you probably have some in your kitchen pantry? 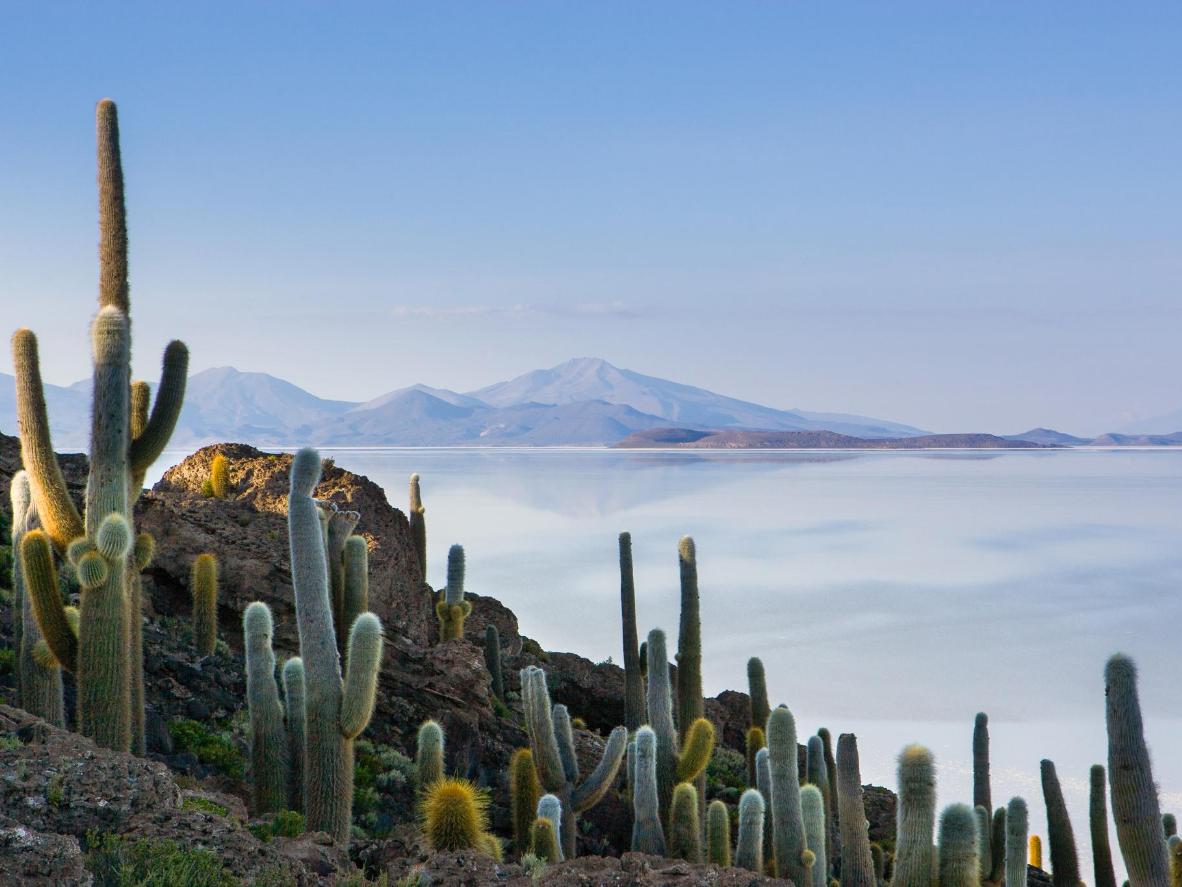 We also visited Incahuasi Island, a cactus island in the middle of the salt plains. Families actually live on the small island with cactuses thousands of years old sticking straight up out of the tiny island’s land. Who knows how they survive on cactus and salt?

We stayed in hotels made of salt with beds made of salt bricks, pinned to the hard bed and weighed down by Llama blankets, so heavy (but warm) you couldn’t roll over. 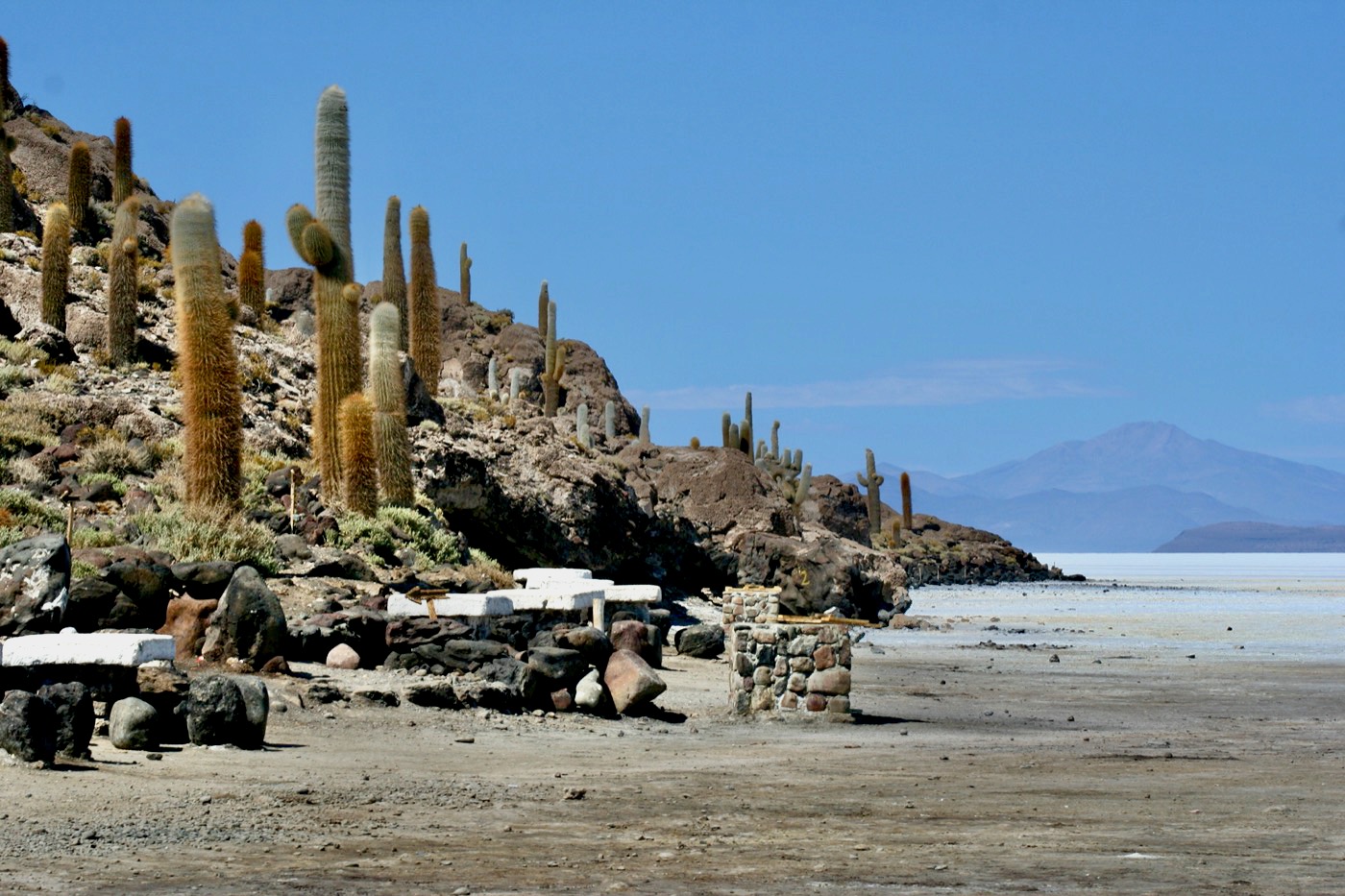 I managed to get bad vertigo so who knows how I survived (couldn’t stand up and vomited the whole time across Salar de Uyuni). The altitude was so high but of course we didn’t initially acclimatise in San Pedro de Atacama. Apparently, you’re meant to!

Believe it or not it was still the most amazing adventure to see the Bolivian salt farmers, cactus island, bright pink flamingos and other wildlife with a group of fun adventurous people from all over the world. 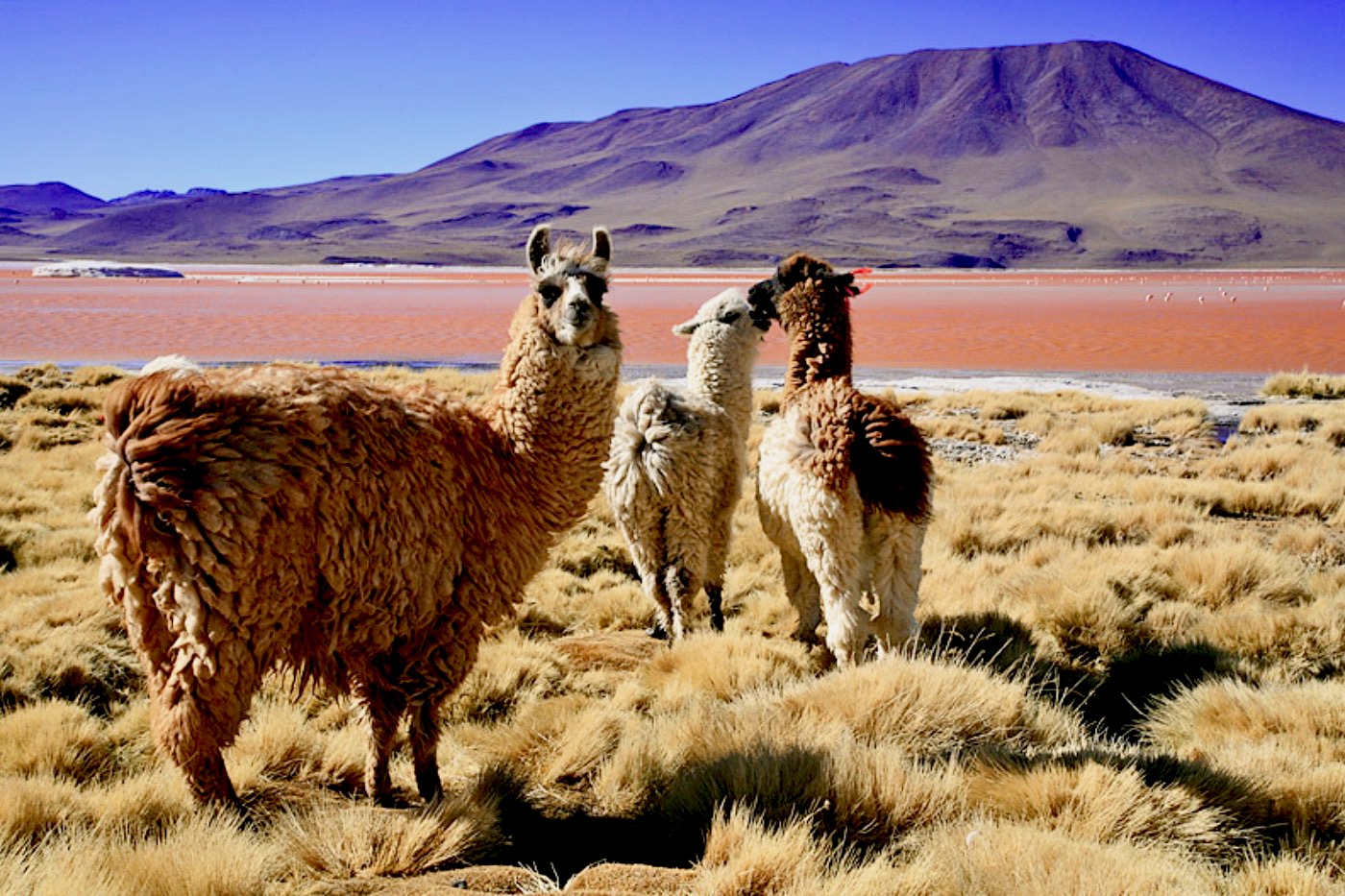 The Town of Sucre Bolivia 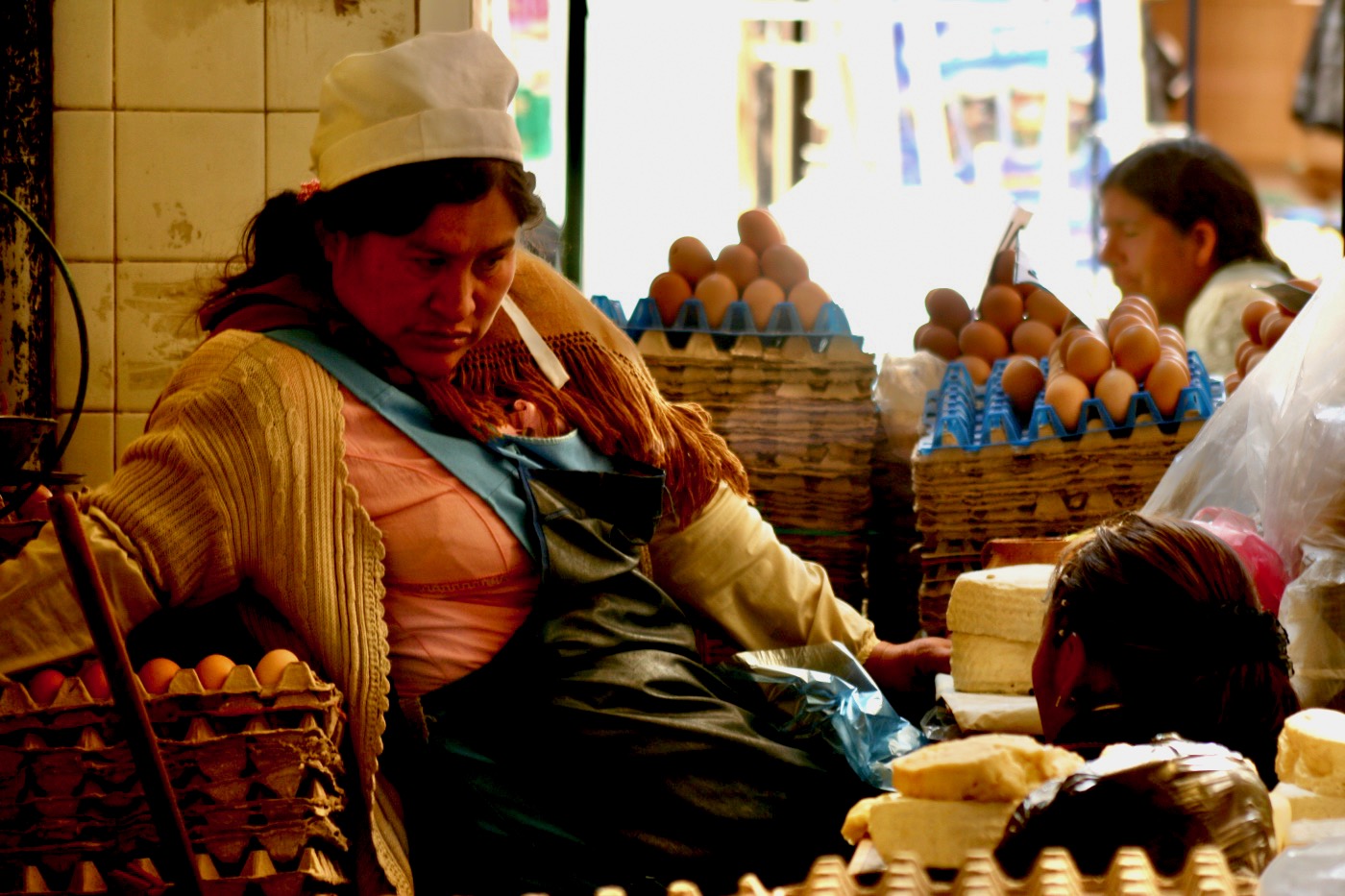 After a very uncomfortable and crammed 11-hour bus ride from Uyuni we have now arrived in Bolivia, Sucre. The town at the end of a Salar de Uyuni tour. The bus shook so much we almost lost our fillings.  To top it off the seat in front of me was broken so the man in front had his head in my lap. After a few hours I managed to convince him it was not a good idea. All we could do was laugh hysterically!

Bolivian people are so laid back nothing phases them, so he didn’t see a problem. They chew way too many coca leaves.

We’re still hanging out with the crew from our 4WD tour and having lots of fun cruising around.  Today, we had lunch for 50 cents and a jumbo sized freshly squeezed juice for 75 cents at the local market. It is so cheap in Sucre. 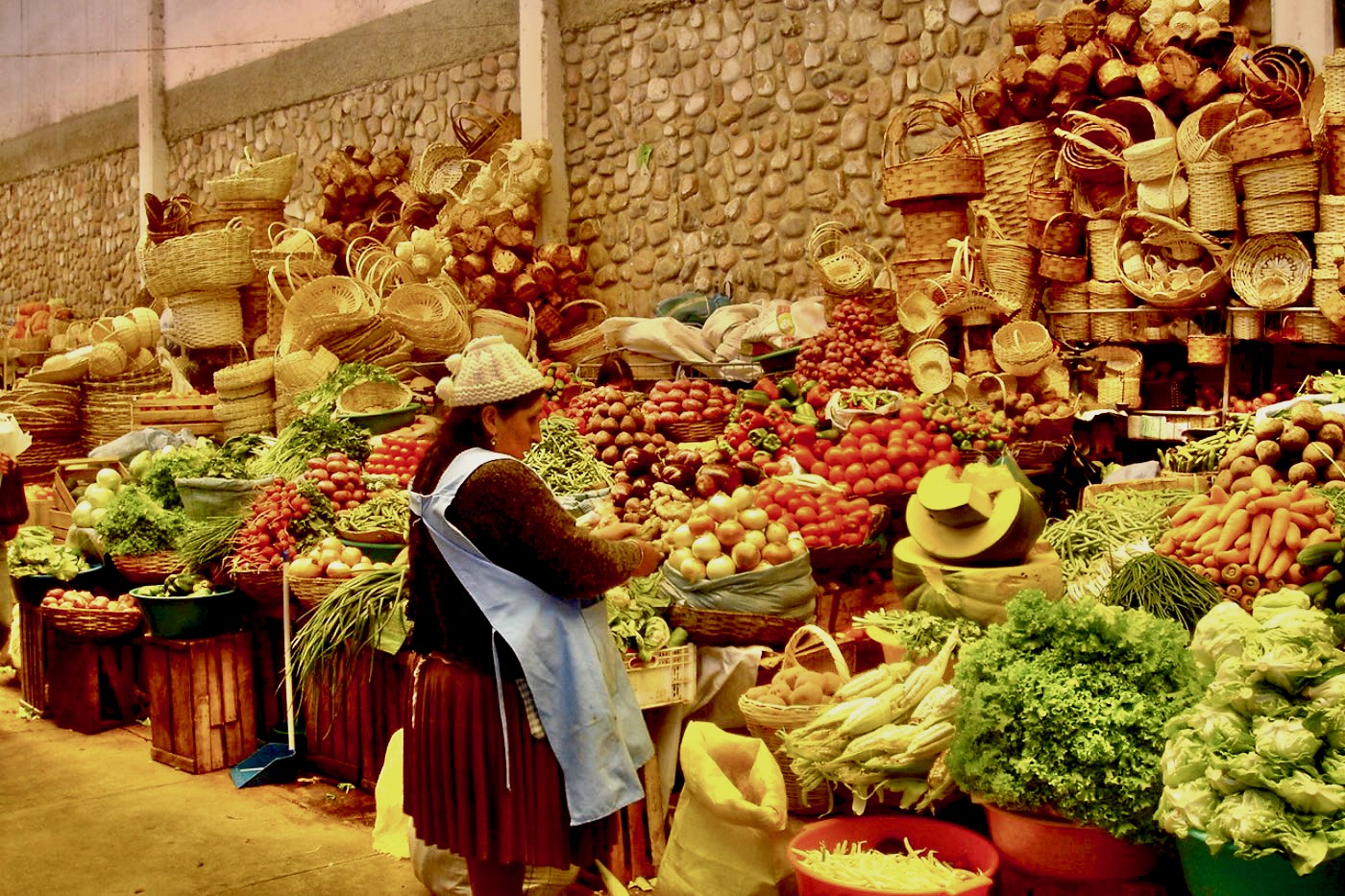 The water pressure is pathetic to say the least. So, I had to visit a Bolivian hairdresser and have my hair washed. Girls for $3 Aussie you can get a wash and blow wave. Also straightened with a prehistoric iron. I’m the best groomed traveller around!

Sadly, it’s time to leave Bolivia, say goodbye to our new friends and onto our next destination, Brazil.