So, you ask, what to do in Rotterdam in one day? Apart from being cool, Rotterdam has a very steep history and expansive waterways. The streets are filled with wonderful iconic buildings, impressive sculptures and an incredibly strong food scene.

You’ll find a cultural and contemporary warmth with an architectural twist as you navigate around this charismatic city, it’s sure to satisfy your appetite. Firstly, let’s set the scene with some quick and interesting facts about Rotterdam. 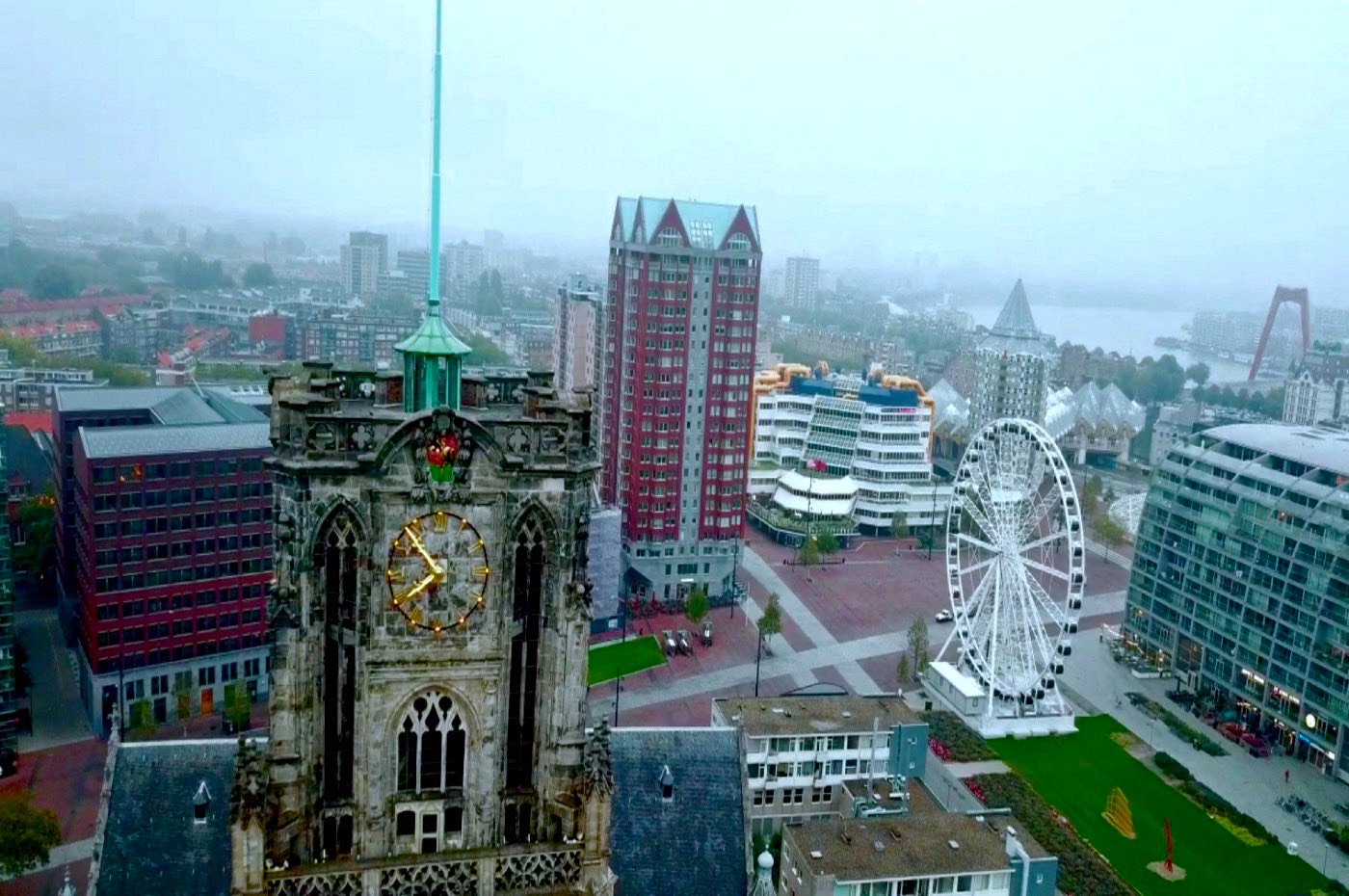 Cool Things  – What to do in Rotterdam in One Day

In the centre of Rotterdam, you’ll find restaurants, cafes, bars and delicious produce displayed on the streets with unique fashion shops in between. Adding to the ambience, shop fronts display beautifully coloured flowers creating a majestic feeling.

So, what are some cool things to do in Rotterdam in one day in this wonderful city? 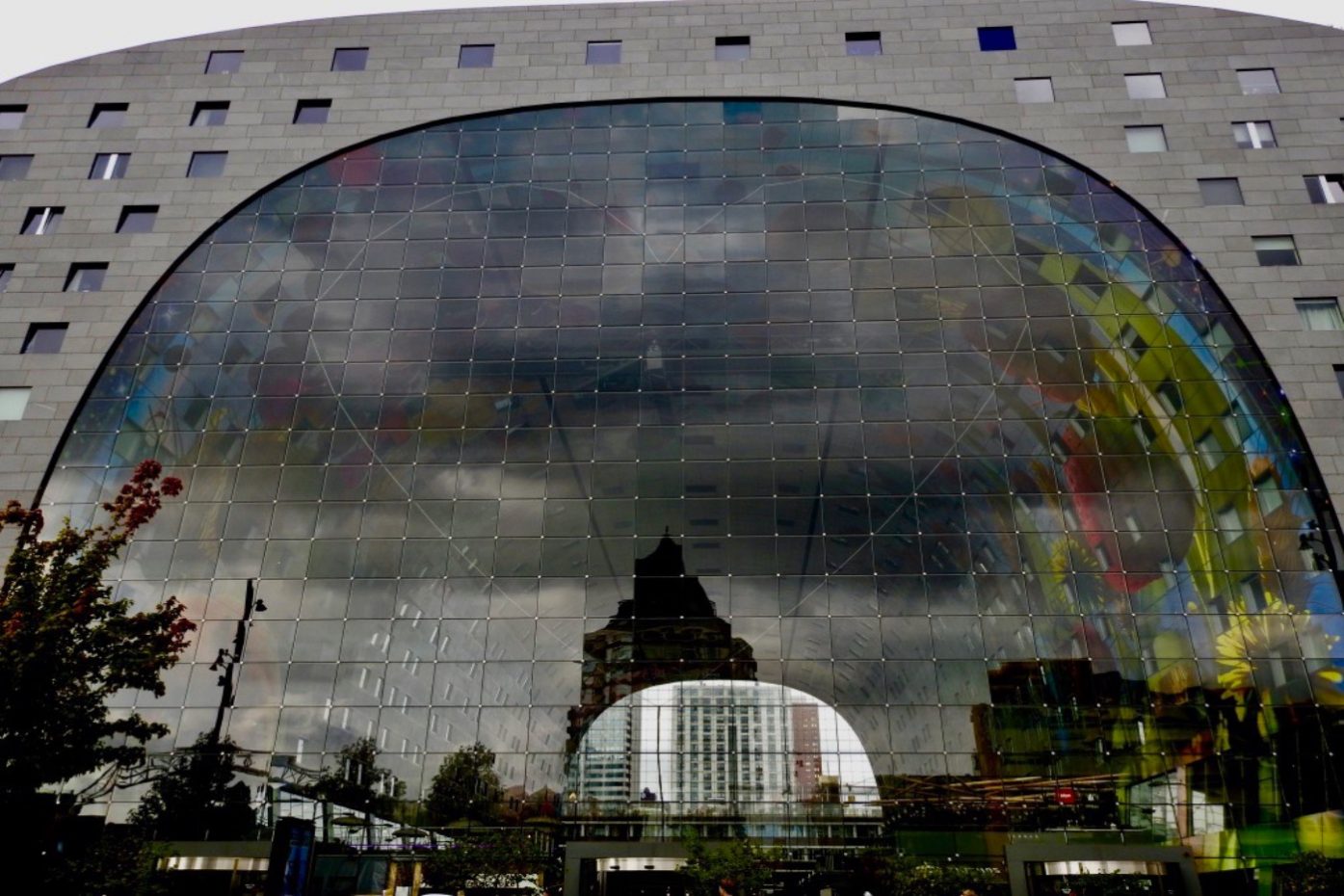 When walking towards Hoogstraat the main centre of Rotterdam you can’t help but instantly being drawn in by this enormous landmark building. An impressive dome shaped building known as the Blaak Markt (Markthal).

As you enter the Markthal through the large glass doors your eyes will immediately fixate on the perfect architecturally designed arch (or dome) above. You’ll notice it’s entirely covered with large colourful artwork ‘horn of plenty’, depicting fruit, flowers and grazing cows all tumbling from a summer sky.

Then instantly you’ll be drawn away, attracted to the smells and sights of the beautiful fresh produce laid out in front of you. There’s meats, cheeses, confectionery (and much more) tantalisingly displayed to reach out and draw you in, every stall offering delicious tastings. You could spend days here just nibbling and fulfilling your hunger.

If you take a closer look again at the arch above you’ll see windows where residents and workers peer down on the market hall below filled with restaurants, cafes, locals and tourists as they go about their day.

TIP: We recommend that you try the local popular Dutch snack – a raw hearing topped with onions, it’s very tasty!

And, finally, don’t forget to keep your camera handy as you take in the sights, sounds and scenes of this amazing structure. 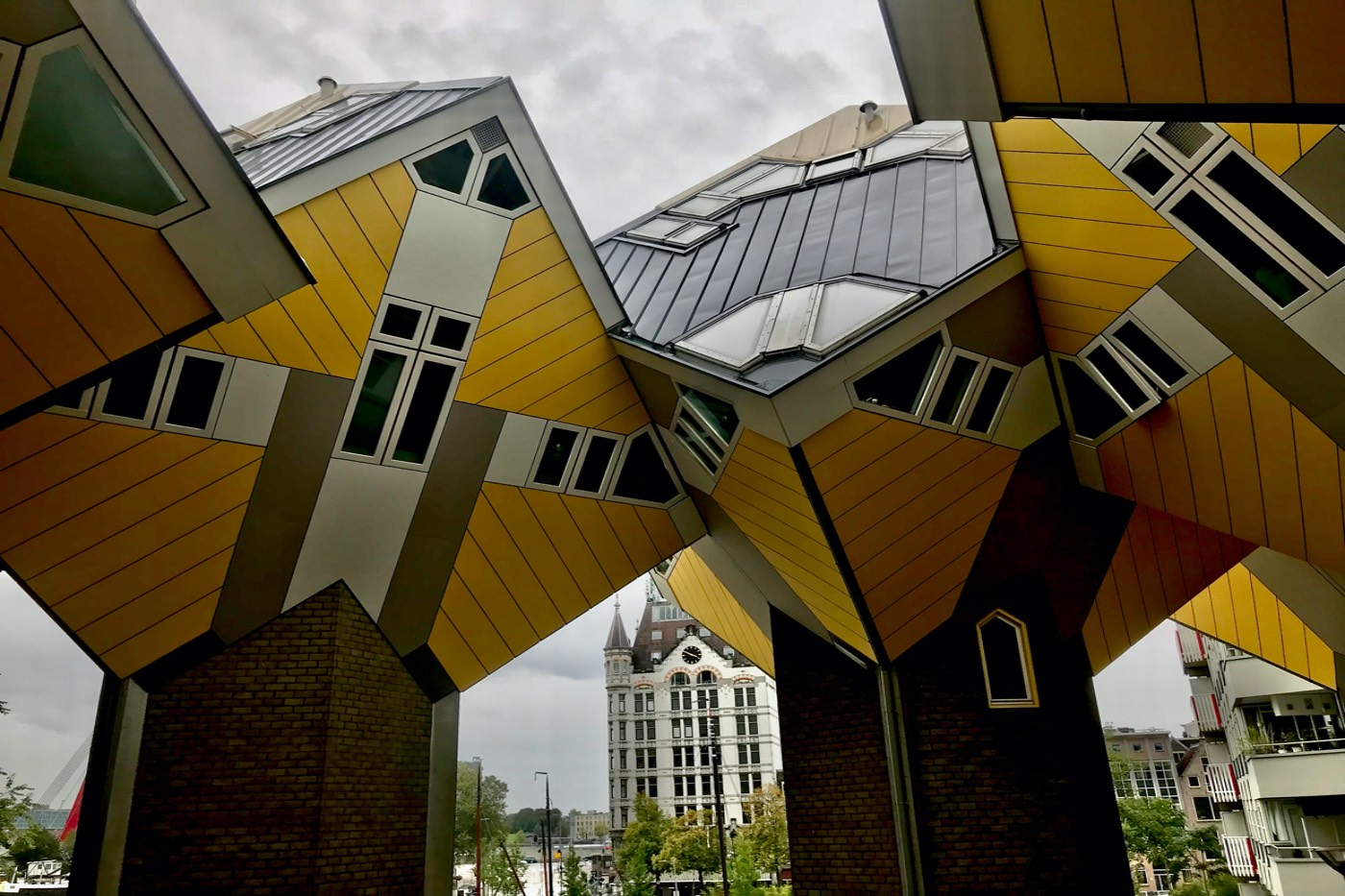 One of the city’s most iconic attractions not too far away and virtually opposite the Markthall, is another piece of architectural brilliance known as The Cube Houses (Kubuswoningen).

Designed by Dutch architect Piet Blom the yellow and white houses are a stroke of genius and an example of Rotterdam’s creative spirit.

A populated group of cube shaped apartments turned upside down in one corner, perched on tall pillars and optimised to make the most of the valuable space.

Conveniently located next to Rotterdam Blaak railway station, with the Oude Haven’s restaurants and cafes on their doorstep.

We recommend visiting this amazing structure to see what living life at an angle looks and feels like. An experience unlike anything else you’ll find anywhere in the world. 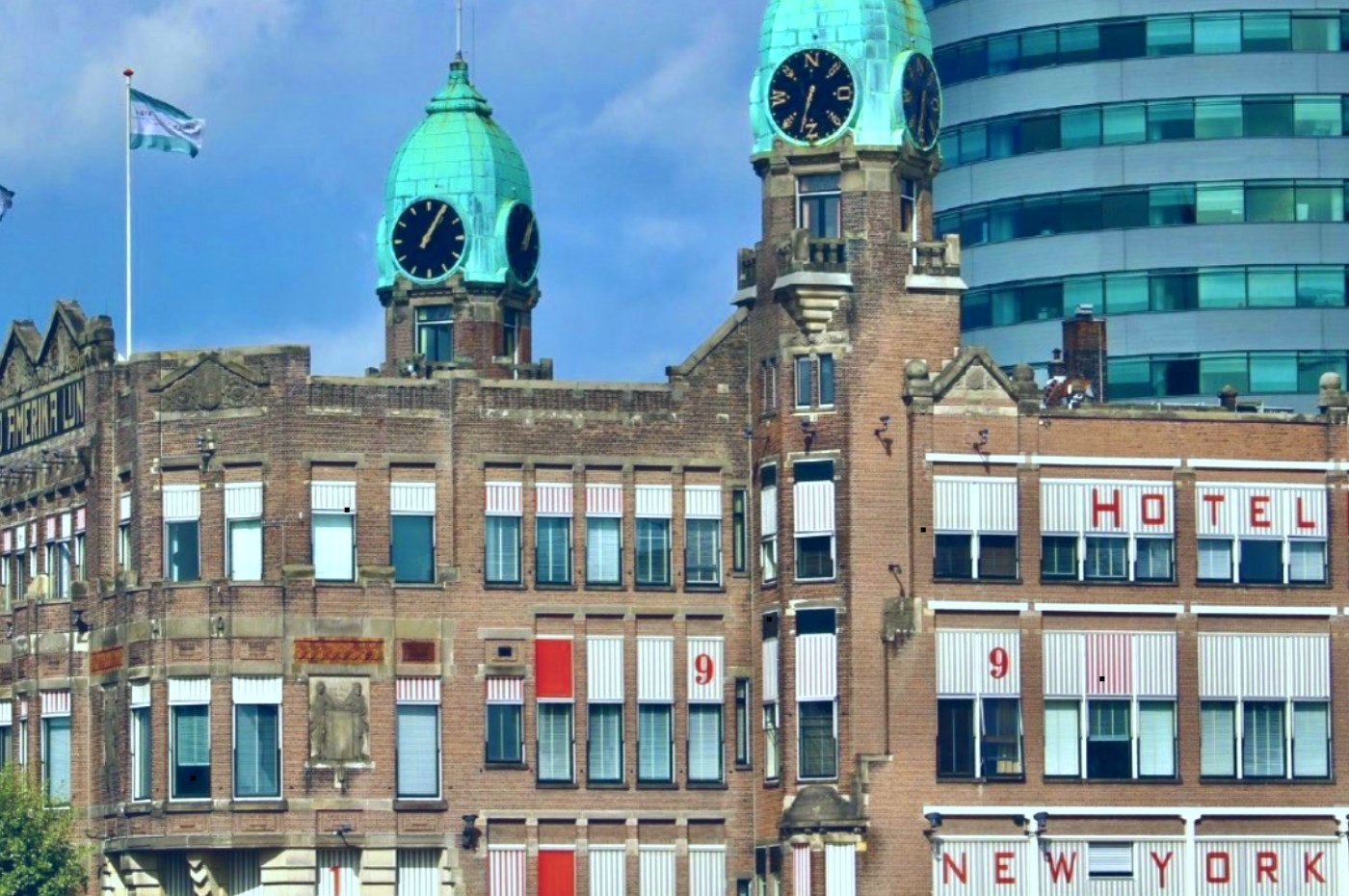 The best way to get to Hotel New York is to make your way to the harbourside. Once there catch a water taxi to the south bank of the Nieuwe Maas river where you’ll find the beautiful Hotel New York.

Once the headquarters of Holland American Line Cruises. In 1971 the last ship set sail with immigrants seeking a better life to ‘the promised land’ New York, America.

The shipping industry went through a change and the Holland American Line moved out.  It then remained vacant until it was transformed into Hotel New York in 1993, keeping as much of the original features as possible.

The hotel consists of a restaurant, bar, terrace, kiosk and bookshop. The terrace of the hotel offers views across the Nieuwe Maas River and is most popular for a glass of wine or a romantic cocktail or two.

Surrounded by modern architecture and other attractions it’s definitely a cool place for an unforgettable stay in Rotterdam. Oh, and don’t forget to book their restaurant ‘NY Basement’ – hip and historical with a nod to the twenties and thirties.

And, there’s more you can do in Rotterdam in one day, so read on! 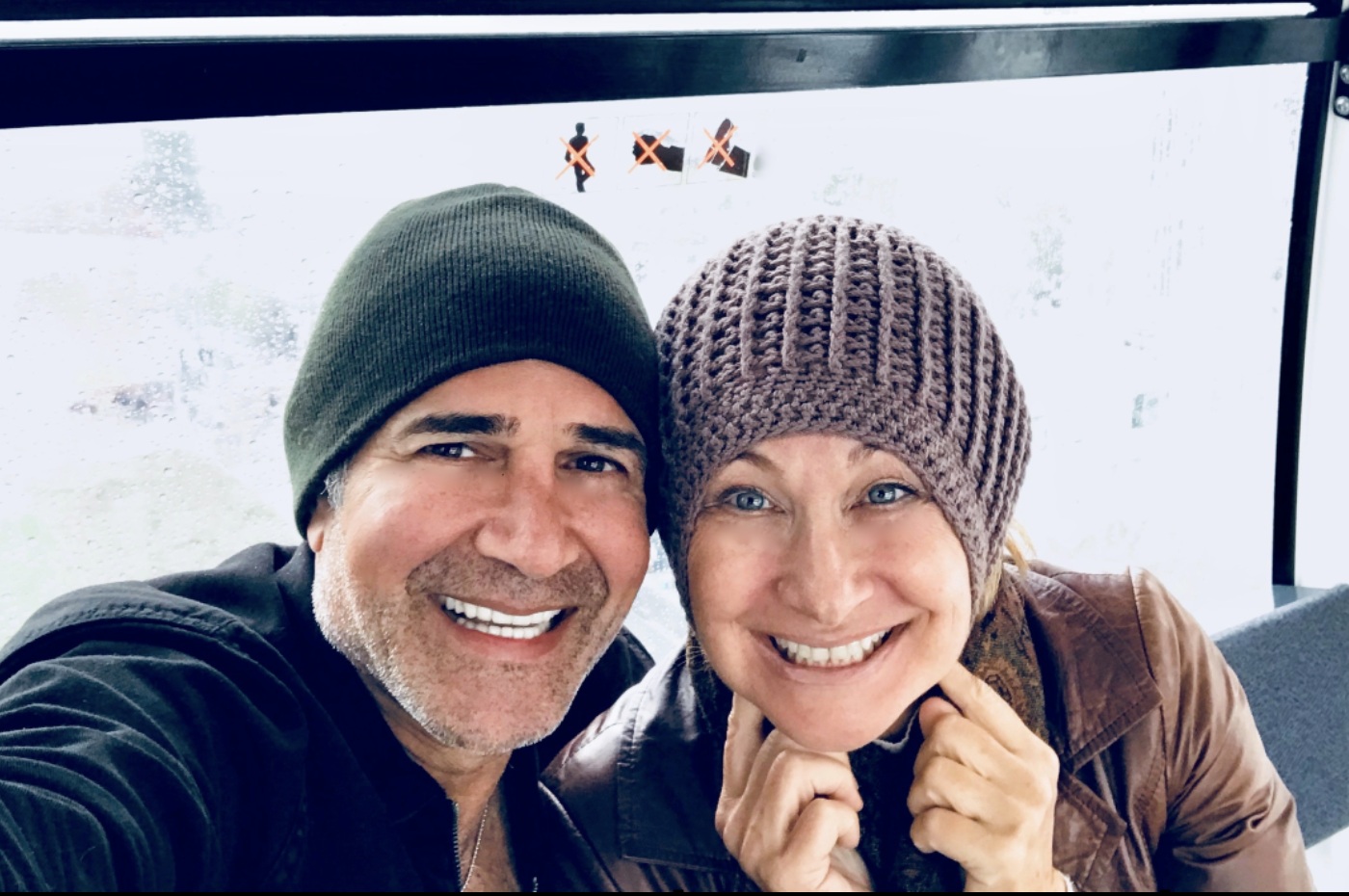 Opposite Hotel New York is the Fenix food factory, a fresh produce market located in a restored rustic warehouse on the water’s edge.

Inside you’ll find a bunch of entrepreneurs who share their love of fresh food and expertise in handmade crafts. Grab a plate, pull up a waterside chair and taste the wonderful flavours of the delicious fresh foods on offer.

Open from Tuesday to Sunday with live jazz performances and game evenings every Thursday.

Also, in 2020 a restoration (extension) of the Fenix Foods II Factory will take place. On completion it will tell the story of millions of migrants who arrived and departed from these docks. 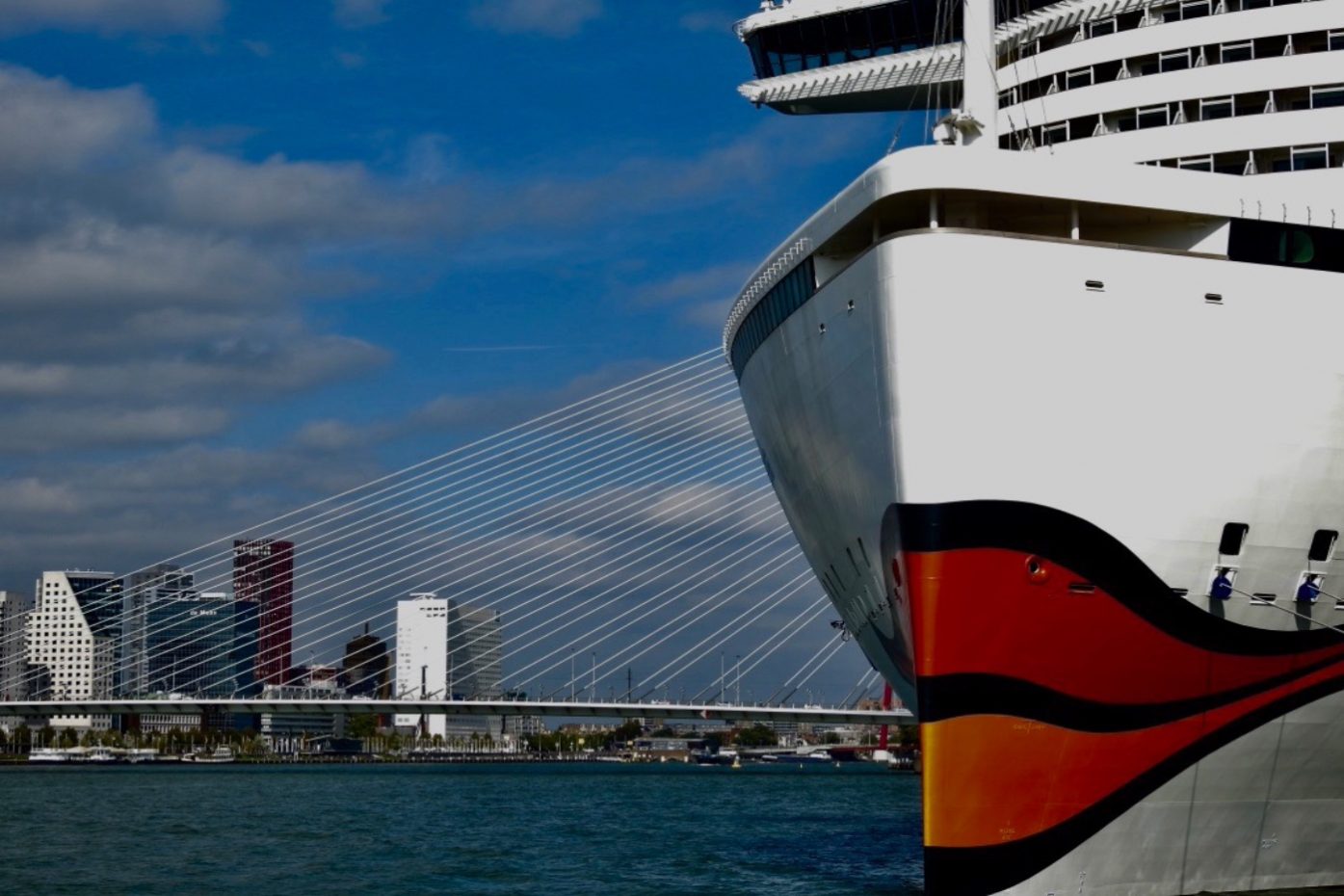 Later in the afternoon, we recommend that you head towards the Erasmusbrug Bridge.

Also nicknamed ‘the swan’ the impressive Erasmusbrug Bridge opened in 1996 and spans 800 metres wide and 139 metres tall. Another architectural engineering feat built out of light blue steel, a must see when visiting Rotterdam.

The bridge and its surroundings certainly have much to offer to any visitor providing 360-degree views of this remarkable city. It connects the north and south sides of Rotterdam and can be explored by foot or bike.

Famous for many spectacular events including the annual World Port Day. A large-scale maritime event that celebrates Rotterdam’s harbour and Europe’s biggest seaport.

Other important events include the Marathon of Rotterdam, Hollands largest running event. Check out the many events here.

So, that’s what to do in Rotterdam in one day.  Next time you’re visiting Amsterdam, why not take the 1 hour train trip into Rotterdam. You’ll be thanking us later.